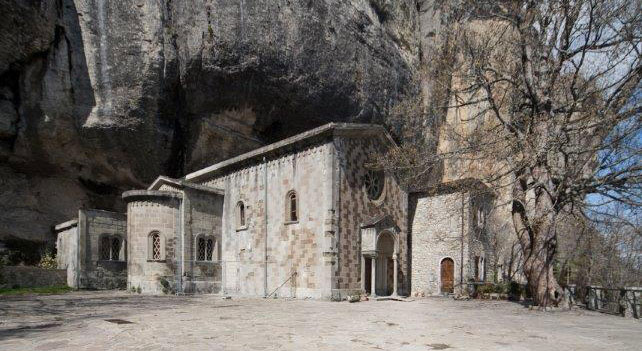 The Pietra has always been perceived by man as a place close to the divine, as a symbol of spirituality. Testimony of that is a necropolis that was built at the foot of the Pietra way back in the XI century BC (Campo Pianelli).

For centuries, when military camps and fortifications were constructed on summits, they were always built alongside places of worship. At the food of the rock there is a hermitage, edified in 1617, tha was run by Benedectine monks for centuries and that now hosts a Marian sanctuary.

In the sacristy are preserved frescoes dating back to the XV century, among these is the Madonna of Bismantova to whom the Hermitage is dedicated and to which, for centuries, took place a pilgrimage.

In the nearby villages, ancient churches were built in honour of saint Apollinaire of Ginepreto, Saint Peter and Paul of Campolungo and Saint Prospero of Vologno and similar chapels in smaller hamlets, such as Saint Anna in Maro, SS. Angeli custody in Carnola and Casale, Saint Caterina in Bondolo. An endless number of splendours, icons and signs of devotion from all ages can be found in this territory. Recently, a permanent via Crucis was created on the path leading from Casale to the Foresteria.

A testimony to the especial energy emanated by the rock, the Pietra has always been the destination of religious or folklore pilgrimages. Numerous legends are connected to the special places in the areas, such as the “devil grotto”, the rocks that have a shape similar to that of “horse heads”, and the “rooster of Fontana Cornia”.